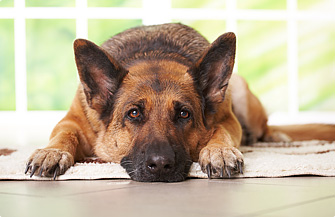 Parasites: fleas, other skin parasites, tapeworm and roundworm infections are common problems. We recommend worming dogs every 3-4 months with drontal tablets. Maintain protection against fleas and ticks with products such as Advocate, Advantix, Fiprospot or Effipro. 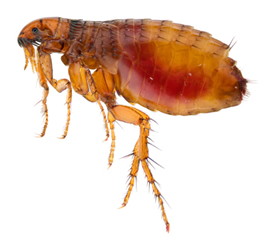 By far the most common skin parasite encountered, mainly responsible for a generalised irritation of the skin but some animals can develop an allergic reaction causing much more extensive skin damage. They can also transmit the tapeworm Dipylidium between animals.

Fleas are wingless insects a few millimeters in length that infest domestic pets and feed by piercing the skin with their mouthparts and ingesting blood. There are over two thousand species of flea worldwide but the main species found on domestic pets in the U.K. are Ctenocephalides felis and Ctenocephalides canis. Both can infest images/many different species of mammal. The majority of the life cycle of the flea is actually spent off the host animal, only the adult fleas are actually parasites, and these can survive up to 6 months away from the animal. Fleas deposit their eggs in the environment from which will hatch the flea larvae. These later develop cocoons and pupate. The adult flea later emerges from the cocoon and begin feeding as soon as they find a suitable host animal.

Fleas can cause ill health through the development of anaemia especially in young animals if they are exposed to a heavy infestation due to the blood loss caused by the fleas feeding. They are also involved in transmitting the tapeworm Dipylidium caninum. Certain animals are allergic to components of the saliva of the flea leading to a hypersensitivity reaction called flea allergy dermatitis if they should be bitten. Most cases of flea infestation are diagnosed by the presence of fleas in the coat, some may also show considerable quantities of flea dirt. This consists of numerous small black specks of digested blood, when placed on a damp white tissue a red stain will form. The clinical signs of flea infestation may vary from a mild irritation to an intense itch, the area of most damage to the coat is often to be found along the back and at the tail head. Hair may be stained brown by chewing and is often broken off leading to areas of baldness.

Treatment of this problem can be effective but several points have to be borne in mind:

Treatment of the individual animal must be carried out with a product proven to be effective, many products which are marketed for flea treatment are not effective enough, especially for those animals which have developed a flea allergy. Consult your veterinary surgeon for advice on appropriate treatments.

• All animals in contact with the affected animal must be treated to prevent spread and later reinfection.
• Because the flea can survive off the host animal for up to 6 months and the eggs, larvae and pupae also exist in the environment it is important to treat the environment with an effective insecticide.
• Reinfestation is common, especially during the summer months so regular retreatment must be carried out.

Several effective drugs are available for use, treatments such as Advocate, Advantix, Effipro, and Comfortis are excellent for treating animals, and sprays such as Acclaim can be used on the household environment. If you have any doubt as to whether the product you are using is effective then consult your veterinary surgeon. 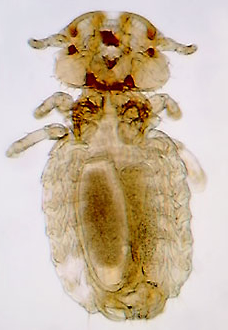 There are two common species of dog lice, Trichodectes canis, and Linognathus setosus. Infection with these is a fairly common condition. The lice are entirely dependant on the host animal for survival, and will not survive for more than a few days in the environment.

The main clinical signs of infection are a general restlessness and itch, the affected animal is frequently in poor bodily condition and may have sustained skin damage from excessive scratching. The louse eggs are usually easily seen attached to the hair shafts.

In severely affected animals an anaemia can develop due to excessive blood loss.

Treatment is simple, using safe Spot-on preparations such as Advocate. Many products are available, ask your veterinary surgeon for advice. 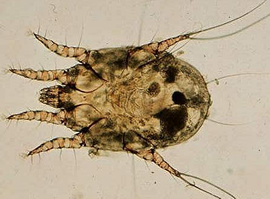 This mite is commonly found on dogs, mostly in the ears, but occasionally around the face. They can persist within the ear canal with no obvious adverse affect to the animal but frequently they are responsible for an irritation of the ears and the production of a waxy brown discharge from the ear canal. This is frequently followed by a bacterial infection which establishes itself in the waxy exudate.

The common signs of infection are the animals starting to scratch or shake their head excessively and a distinctive unpleasant smell originating from the ear canal. The continual scratching or shaking of the head can result in the development of traumatic injuries to the ear, and in some cases aural haematomas.

Diagnosis is made by examination of the ears and identification of the mites, in some cases the ear canal can be too painful to allow easy examination and your veterinary surgeon made sedate the animal, or start treatment and ask to reexamine at a later date.

Treatment can be carried out with a number of preparations, ask your veterinary surgeon for advice. Ear drops usually contain a mixture of drugs including anti parasitic drugs to kill mites, antibiotics to deal with any secondary bacterial infection and anti-inflammatory drugs to relieve the discomfort and irritation. Mild cases will respond well with ear drops alone, severe cases can require additional antibiotics or anti-inflammatory medication to be given by mouth. It is important that the ear canal is cleaned thoroughly before applying medication to allow the treatment to penetrate to the deeper parts of the ear canal.

This mite is easily transmitted between animals so any in contact animals should also be treated. Treatment should persist for at least 2-3 weeks to ensure killing any newly hatched mites. In those animals which suffer repeated recurrence of this problem, regular ear cleaning should be carried out to remove wax deposits. 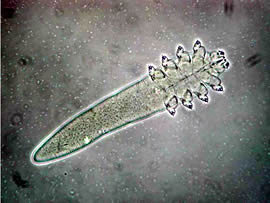 Demodex is a mite which lives within the skin of most mammals. It is a common condition and can be serious, especially in young dogs. It is not easily transmitted between animals and it is thought that the development of the disease may be the result of a genetic immunodeficiency inherited from the parents, or can develop when the immune system of the animal is suppressed for another reason.

The mites live within the hair follicles in the skin and can cause localised lesions around the muzzle, face and forelegs, or be generalised over the entire body surface. Many localised infections are relatively mild, involving only hair loss and thickening of the skin, affected animals are often not be particularly itchy. If secondary bacterial infection should develop then the skin becomes wrinkled and thickened and can ooze blood, serum and pus. If severe and generalised this can necessitate prolonged treatment and recovered animals can be left disfigured.

Diagnosis of this condition requires skin scrapings to be carried out and the material collected to be examined microscopically for the demodex mites. This procedure will be repeated at intervals during treatment until several scrapings are negative for the presence of mites.

The spot-on treatment, Advocate is effective. Alternatively, treatment is by use of a drug called aludex which is diluted in water and used as a wash. It is useful to clip the affected areas and clean them the day before treatment to remove the surface debris and allow better penetration of the drug. Washing should be carried out once weekly until the skin scrapings are negative. Localised cases should improve with treatment within 1-2 months. In cases of generalised demodicosis with secondary bacterial infection the treatment will also require use of antibiotics and the course of treatment is likely to be much longer and more intensive than in local infections. Up to 3-4 months of treatment can be required and the prognosis for the worst cases is guarded.

Up to 10% of animals can experience a recurrence of this condition after apparently being cured. 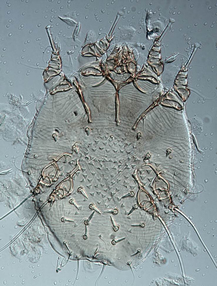 A common and intensely itchy skin condition caused by a burrowing mite called Sarcoptes scabei. This disease is highly contagious and easily spread between animals by contact. The problem is most common in the younger age groups but older animals can become affected. This mite can also be transmitted between humans and animals.

The mites spend their entire life cycle on the skin, living in tunnels burrowed into the outer layers of the skin, eggs are laid in these tunnels from which larvae hatch and make their way to the skin surface develop into adults and subsequently burrow back into the skin. The most commonly affected areas are the face, ears, muzzle, and elbows, but the disease can extend over the entire body.

The skin becomes inflamed with excessive scale and crusting and starts to lose hair. The intense itch often leads to further injury through excessive scratching. The edges of the ears are often the first area affected.

Affected animals should be isolated to prevent spread and treated with an acarcide such as selamectin. With prompt attention and effective treatment there is usually complete resolution of the problem. 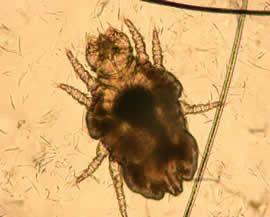 This is a mite which lives on the skin surface, eggs are attached to the hair shafts and hatch as larvae, develop into nymphs, and then into adults within approximately one month. They are transmitted between animals by contact.

Some animals show little reaction to infection, others develop an itch and have an excessive amount of dandruff in the coat. The diagnosis of the problem is by finding excessive scale and the mites on the skin surface, often by microscopic examination of tape strips applied to the skin.

Treatment can be carried out using various anti-parasitic preparations, solutions such as Advocate have been proven effective. 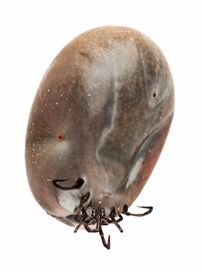 Ticks are frequently found on dogs and cats, more so on those which have access to areas of countryside and hill pasture. The most commonly found species is Ixodes ricinus. This tick feeds once annually as a larvae, nymph, and then adult. Its period of greatest activity is in the spring and autumn. When adult they will mate and lay several thousand eggs on the ground. It is only a temporary parasite, since once it has eaten it leaves the host.

The typically presentation is that the owner will have noticed the sudden appearance of one or more lumps on the dogs skin, the feeding tick is easily identified on close examination, there may be an inflammatory reaction in the skin surrounding the tick. Tick removal must be done with care to ensure that the mouthparts are not broken off and remain in the skin, this is easiest done with the aid of forceps or tweezers. Should any part of the tick remain attached a foreign body reaction may occur in the skin.

Following removal your pet should be treated with an anti parasitic drug. effective against ticks.

Ticks are important as the carriers of disease, in the West Highlands of Scotland Lyme disease is a consideration, as is Babesiosis abroad. For this reason should you travel with your pet it is important to apply effective treatment. Drugs such as Advantix are suitable. Ask your veterinary surgeon for advice.

This mite lays its eggs in the soil, the larvae hatch in mid summer and seek contact with suitable host mammals. The larvae feed on the skin causing an irritation which may result in further self inflicted injury due to excessive scratching. The larvae are normally found on the head, ears and flanks of dogs and cats. The peak population occurs in late summer. Pets should be restricted from having access to areas that are suspected of harbouring large populations of mites. Many insecticides are effective for treatment, ask your veterinary surgeon for advice.